In the weeks leading up to my birthday my sister asked the usual question about what I’d like as a present, and since Caron Cakes had just been released in the UK, I had no problem answering her! You see, I’m on a self imposed yarn buying ban however I managed to get around this by asking for it for my birthday.

She ended up getting me three balls, one each in Bluberry Cheesecake, Mixed Berry and Red Velvet and despite my determination to work on two blankets that I’ve had on the go for far too long, I couldn’t wait to get started on a project with them. Now, since I had only one ball in each colour, and at the moment I really can’t justify buying more yarn, let alone some that costs £10.99, my choices were somewhat limited in what I could make.  I searched online for patterns, and eventually settled on a v stitch triangle scarf, using the ‘V-eekender Scarf/Shawlette‘ pattern by Kimberley Slifer on Ravelry. Given that summer is rapidly approaching some may say that a scarf isn’t the best idea, however I live in Scotland and you can never be too sure what the weather will do!

I decided to use Blueberry Cheesecake and was intrigued to see how the scarf would look given the so-called ‘abrupt’ colour changes. Once I got going I realised that each section of colour is actually quite long and the way that this pattern worked out it seemed that most of the changes ended up being near to one of the sides. Even then, I don’t think they’re that noticeable and don’t mind them too much; I’ve read about a few people cutting the yarn so they don’t have any colour changes mid row, but personally I think this almost defeats the purpose of this type of yarn. 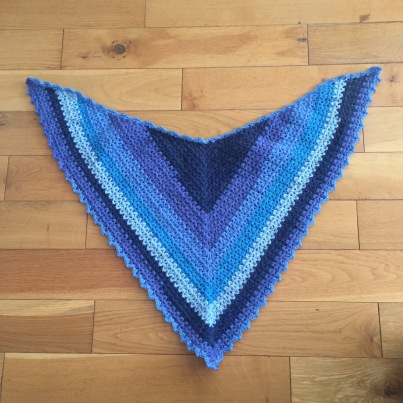 The scarf worked up really quickly. It’s made up entirely of rows of V stitches and then there’s picot edging. The pattern is easy to follow, with written instructions and photographs for each stage. I ended up doing a couple of extra rows because I could tell that I wasn’t going to use the whole ball, even when I had done the edging.  It was such a relief at the end when the only ends that I had to sew in were the start and end ones! 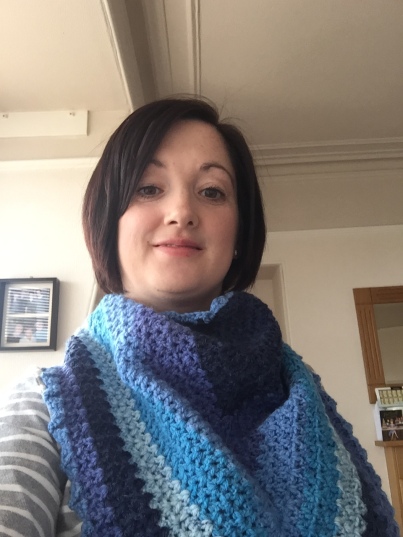 From what I’ve read on various forums and Facebook groups, there’s divided opinion on Caron Cakes, some people love them and some hate them. As for me, I like it – it feels nice and soft, has a nice thickness and even though it contains wool I don’t think it’s scratchy at all.  It is a bit more expensive so I don’t think I’d use it frequently, but for special projects I’d definitely to use it. 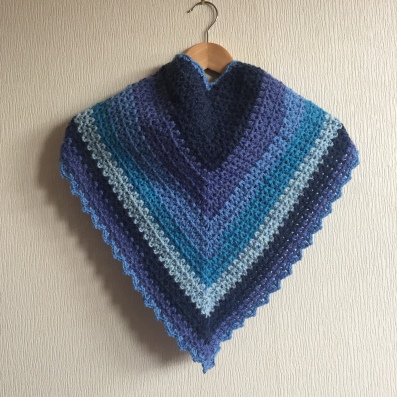 I’m undecided as to what I’ll do with the other two balls, although  I will more than likely end up making a scarf, but if I feel like treating myself I might buy some more so that I have enough to make a blanket, I think the Mixed Berry one would make a lovely Corner to Corner blanket. Just not yet, I need to get going with my other projects, my sister has been waiting six months for her blanket, just as well she’s patient!